Tribal Land Base Expands for the First Time in 14 Years

On March 18th, Assistant Secretary of Indian Affairs Tara Sweeney issued her opinion to have 16.63 acres of on-reservation, non-gaming acquisition taken into trust status. The long-awaited 43-page decision resolves a challenge to the Tribe’s federal status made by the City of Snoqualmie in 2015 in the wake of the U.S. Supreme Court’s decision in Carcieri v. Salazar.

“This is a huge victory for the Snoqualmie people,” said Snoqualmie Tribal Council Chairman Robert de los Angeles. “The decision of the United States adds much needed land that will help the Snoqualmie people and reaffirms our status as a Treaty signatory.” Chairman Robert de los Angeles added, “we would like to thank Assistant Secretary of Indian Affairs Tara Sweeney for her leadership and thank all of the staff at the Bureau of Indian Affairs and the Office of the Solicitor who worked on this very important project.”

In Carcieri, the Supreme Court decided that the Secretary may only take land into trust for tribes that were “under federal jurisdiction” in 1934 —the year the Indian Reorganization Act was enacted. The Tribe can now follow the land-into-trust process for other property owned by the Tribe because it was confirmed to be “under federal jurisdiction” in 1934. The determination ensures the Tribe will be able to add to its Reservation land base to meet its needs for future generations.

Despite the City of Snoqualmie’s challenging of the Tribe’s ability to have land held in trust, the Department of the Interior decision states the Tribe qualifies to hold land in trust because the Tribe was a signatory of the Treaty of Point Elliott in 1855, and its historical political-legal relationship with the United States dating back to at least 1934.

The four tax parcels taken into trust are adjacent to the existing Snoqualmie Tribal Reservation and they were previously in unincorporated King County. One parcel includes a single-family home and the other parcels are vacant. The Tribe’s Environmental Resources Department currently utilizes the parcels for collecting water quality data and the Tribal Government has no plans for a change in use. Sweeney’s decision states that because the Tribe does not have any plans to change the use of the Parcels at this time, the proposed use is consistent with the existing County land use and planning for the area.

“We deeply appreciate the efforts of the Bureau of Indian Affairs and Department of Interior officials,” added Chairman de los Angeles. “This has been a huge effort for more than five years involving current and past Council Members and countless hours of work by dedicated Tribal staff and our legal team at Kilpatrick Townsend.” 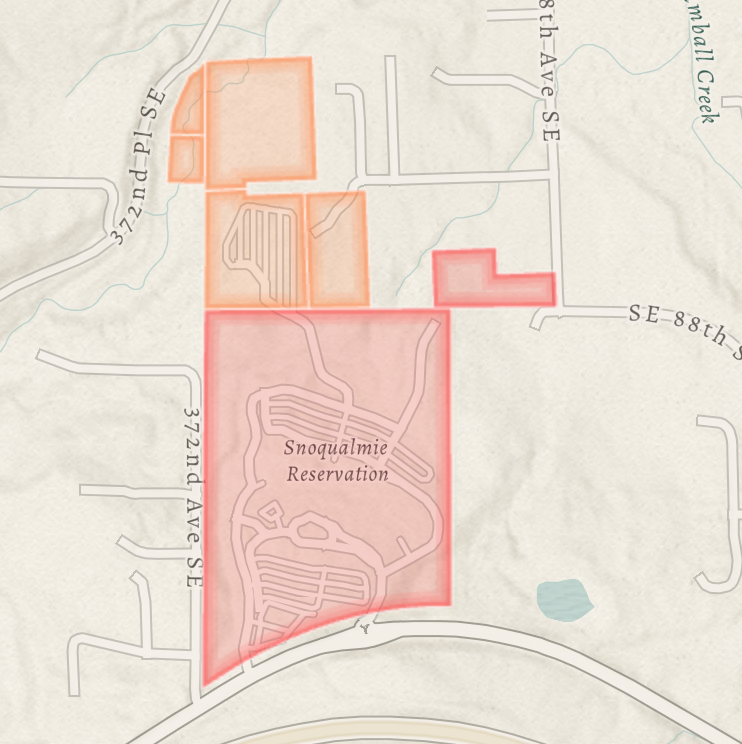 Excerpt from Fee to Trust Decision